The Mystery of the Gold Coin (Greetings from Somewhere Book 1), by Harper Paris and Marcos Calo 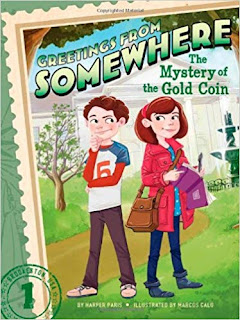 This book is the first book in the ‘Greetings from Somewhere’ series. It has short story.
It is about two twins called Ethan and Ella. One morning their mother tells them she has a new job, she is the travel writer for the local newspaper ‘Brookeston Times’. In this job she has to travel all around the world, see different places and then write about it for the newspaper. This also means that the whole family will have to move and travel along with her. The worst part is that they are shifting next week.

Aru Shah and the End of Time, by Roshani Chokshi 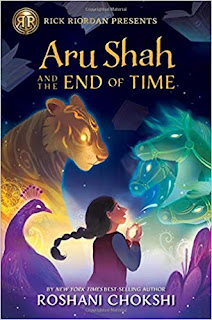 Aru Shah and the End of Time (A Pandava Novel Book 1) (Pandava Series), by Roshani Chokshi

This book was shown to me by my father. My sister had already read this book and didn’t have a great opinion of it. I however, decided to read it and then form an opinion.

‘Aru Shah and the End of Time’ is about a twelve-year old girl named Aru. Aru always feels left out and the odd one out at her school. Her mother is a famous archaeologist, who works at the ‘Museum of Ancient Indian Art and Culture’ and is always busy with work and business trips. The result of all of this was that her mother would often forget about Aru, her classes and her activities. Everyone would be dropped by their parents and have fancy cars while she would walk to school alone. Desperate to change this, Aru starts using her imagination and creates stories about the imaginary cities and places she has visited. Since, Aru practically lives in the museum she uses the artifacts and statues around her as inspiration. An elephant statue in the museum becomes a wild elephant that she tamed and rescued from India. This works and slowly but steadily Aru starts finding a place for herself in school.

One fatal day, she is visited by three of her classmates, Poppy, Arielle and Burton. This time Aru is trapped in her own lie of being on holiday in France. To make things worse, they are recording every single thing she does so that they can reveal all of her lies to the whole school. She decides to do something very dangerous and forbidden, she decides to light the cursed lamp.