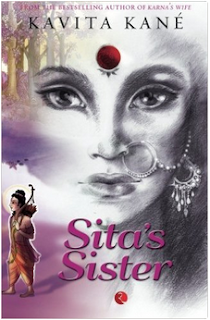 This book is about Urmila. She is a character from the Ramayana who we don’t know much about. Urmila is most commonly mentioned when Lakshman decides to go for exile with Ram. Sometimes we wonder why didn’t Urmila go for exile with Lakshman. She chose to be separated from her husband for fourteen years, rather than to go with him. The Ramayana never really does talk about Urmila. Every time I read the Ramayana, it talks about Ram, Lakshman, Sita, Ravan, Dasharatha, Kaikeyi etc. It never specifically tells us how did Urmila bear these years of separation, and how did she feel when Lakshman decided to go to the forest, leaving her behind. I think Urmila, also known as Sita’s sister was an exceptionally brave woman to bear this separation.

Born to Raj rishi Janaka and Sunaina, Urmila was the happiest girl with company of her sister Sita and her cousins, Mandavi and Shrutakirti. She sometimes was jealous of Sita because her parents heaped lots of love on her and often ignored Urmila. She soon got over this jealousy as her mother had explained it to her. The four sisters soon grew up and it was time for Sita’s swayamvar. The condition for the swayamvar was an unusual one. The person who could lift and break the great Shiv dhanush would be the one to wed Sita. This unusual condition had been placed because Sita as a child had been able to lift the dhanush with ease when it took thousands of people to carry it. Janaka taking it as a good omen decided to place this condition for the swayamvar.

As we all know Sita is married to Ram, Urmila to Lakshman, Mandavi to Bharat and Shrutakirti to Shatrughna. Before marriage Lakshman had warned Urmila that he had devoted his whole life in serving Ram and if any occasion would arise he would choose his brother over his wife. She, despite all this decided to marry Lakshman because she loved him too much to let him go. After reaching Ayodhya barely two months pass when Kaikeyi demands that Ram should be exiled to the forest for fourteen years and Bharat was to become king in his place. Ram, Lakshman and Sita go to the forest leaving Urmila behind. A heartbroken Urmila stays back and starts handling the affairs of the court. Bharat hears of this and refuses to sit on the throne. He instead accepts to rule from Nandigram, a small village on the outskirts of Ayodhya. Bad news comes again. Kaikeyi’s father, King Aswapati had died. Kaikeyi leaves for Kekeya immediately. In her absence, a letter arrives for her. A curious Urmila opens it and reads the horrifying truth.


What was written in the letter, that Urmila was shocked on reading it? How did she bear all the terrible events, that unfolded one by one? What happens when she hears what has befallen Lakshman and Sita?

So far this has been the summary of the book. Here are my views on the book.

Kavita Kane brings out the true feelings of a person in her books. So far, I have read three books of hers and all three of them concentrate on the feelings and thoughts of the person. All her books have been on female characters from the Ramayana or Mahabharata. In this book, it concentrates on all that Urmila feels and thinks.

Again, in this book I feel as a kid, that it could have done with a little less romance between Urmila and Lakshman. In my last Kavita Kane review I had written, was on Lanka’s Princess. Even in that review I had mentioned that there was a little too much romance between Shurpanakha and Vidyujiva. Otherwise I feel that it was a nice book and I enjoyed reading it.

If you want to know more read Sita’s Sister to find out.