Scion of Ikshvaku, by Amish - Review 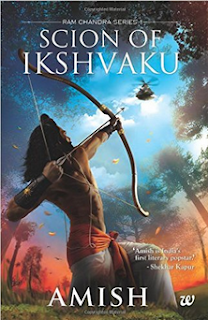 
This book is based on the Ramayana. It is the first book in a series. It goes up to the part when Sita is abducted. It is a fictional retelling of the Ramayana not the actual story. There are many types of retellings. This book is a type of retelling in which the basic idea remains the same but there are a few twists, changes and additions that make a huge difference to the book. Let me just warn you that before you plunge into the review there are few minor spoilers here and there. Well, here goes.

There are many instances in which there are a lot of changes because it is a fictional retelling. Let me tell you about some of them.

Spoilers and more!
The story starts from before the birth of Rama. It starts with the important battle between Dasharatha and Ravan. The battle is not mentioned in most of the books on the Ramayana that I have read. It could have been an addition but I’m not that sure. The battle was important because it was crucial in affecting the lives and relationship of Dasharatha and Rama. This is one of the biggest changes that Amish has added in the book, but I won’t tell you what it is.

One more addition is the war between Mithila and Lanka. Ravan started the war due to his humiliation at Sita’s swayamvar. However, the humiliation is differently described in this book. I won’t tell you otherwise there would be too many spoilers!

It was also said that Rama was forced to participate in the swayamvar. Lastly the exile of Rama is entirely different. It is a completely different story in which Rama himself decides to go to exile and Kaikeyi is just a tool through which it is finally decided that Rama was to go and live outside the Sapt Sindhu for fourteen years. He decides so because he breaks the Vayuputra law. He broke it by firing a daivi astra without the permission of the Vayuputras and Malayputras. Okay enough spoilers let us move on to the differences in the descriptions given in this book.

Each author has his own type of description for characters, and well, this book is no different. For example, this book describes Mithila as a small and barely noticed kingdom on the map. Mithila was supposed to be a hugely flourishing kingdom that once was a river town but with the turning of the Gandaki river it stopped flourishing overnight. In most other books, Mithila is just mentioned as a small but flourishing kingdom.

Another example is that Jatayu is described as a Naga and not a vulture. A Naga is a person who has unusual outgrowth. Jatayu just looked like he had a beak, the truth was that his nose had grown abnormally as to give that appearance. Ravana too is described as a Naga. Another character is Urmila who is also described differently in this book. Sita and Urmila’s meeting with Rama and Lakshmana is completely different. Urmila is said to be the shy and timid one and Sita is the bold and fierce one. In other books that I have read it is vice-versa. The book doesn’t mention the marriage of Bharat to Mandavi and Shatrughna to Shrutakirti.

As you have read there are many twists and turns in the book that change the story but the basic story of the Ramayana remains the same. For example, the exile of Rama happens but the reason changes. These additions and changes has made this book stand out among the other books of the Ramayana. It was this feature of the book that made me want to continue reading it.

I admit the book does go slow at first. While I was reading the book, I didn’t want to complete it because there were few parts I had to reread to understand and the story was a bit slow but my dad forced me to continue. After some time, I began to enjoy it and finally I completed the book.

There is another book in the series and I look forward to reading it. Sadly, I can only read it when my dad is satisfied with this review and my sister has completed reading it too. This book was really nice and interesting to read because with the twists and turns it was always a suspense while reading it. You kept on expecting a sudden change. Most of the chapters ended in suspense so you had to complete the whole book to find out what happened next. Even if you completed this book you would want to read the next book in the series because this book just ends with the abduction of Sita. Even though you knew what happened next you feel like reading it because of the additions and changes.

Till now just two books have been released in this series. The second book is ‘Sita Warrior of Mithila’. Amish has also written a trilogy apart from this series. It is the Shiva Trilogy. The three books are:
• The Immortals of Meluha
• The secret of the Nagas
• The Oath of the Vayuputras

I hope that the second book is as good as this fantastic book.If you want to know more read
‘The Scion of Ikshvaku’ by Amish to find out.

Amazon US, Kindle US, Amazon IN, Kindle IN