From the books I read this year, these are my top six. 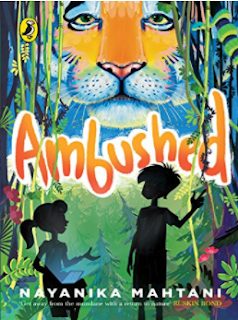 Ambushed
by Nayanika Mahtani
Amazon US, Amazon IN
Tara, a modern-day girl is dismayed when she learns that she is going to spend her holidays near a sleepy tiger reserve at the foot of the Himalayas. Later she discovers a famous poaching gang. With the help of Satya and a friendly wildlife expert Rathore they decide to catch the poachers. I came across this book in an edition of the Sanctuary Magazine. The review of the book was interesting. I decided to buy the book after reading the review. Ambushed was as an amazing book and uncovers the different ways of poaching in India. The book was lovely. It also protests against hunting and poaching in an interesting manner.
(reviewed in April 2017) 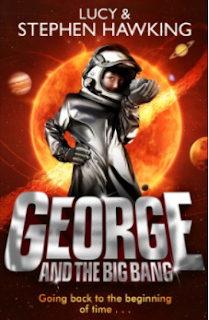 George and the Big Bang (George's Secret Key to the Universe Book 3)
by Lucy Hawking,‎ Stephen Hawking
Amazon US, Amazon IN
This is the third book in the series. Annie’s fathe Erric is working with a group of other scientists to do an experiment at the Large Hadron Collider (LHC) to explore the Big Bang. George Annie find out that an organization named TOERAG plans to plant a bomb and wipe out all signs of the experiment and the scientists working on it as they believe that the experiment would destroy the planet. Eric has already left for the experiment so it was now up to George and Annie to reach there and defuse the bomb. They also realize there was a mole in the team of scientists who was keeping informed about the LHC experiment. Would George and Annie be able to defuse the bomb?
The book was very interesting. I had lots of fun reading it and I also learnt new facts along the way.
(reviewed in June 2017) 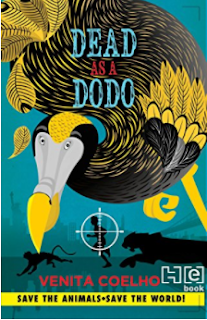 Dead As A Dodo
by Venita Coelho
Amazon US, Amazon IN
Rana, Bagha and Kela were three agents from the AIA on a mission. They discovered that the extinct species, the Dodo is alive! Only one managed to survive and is held at Mauritius, South America. They went to Mauritius but the dodo is taken by another person. Their job was to rescue the dodo, Sam, and find a home where people won’t try to hurt him. This was a very interesting book. It was peppered with comments from Kela the monkey and Sam the Dodo making it hilarious. Sam kept on wailing about being the last dodo alive while Kela tried to console him but he wasn’t very successful. The ending of the book was so funny! I couldn’t stop laughing. I loved this book and enjoyed reading it a lot.
(reviewed in April 2017) 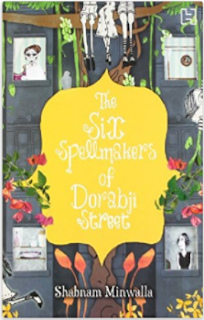 The Six Spellmakers of Dorabji Street
by Shabnam Minwalla
Amazon US, Amazon IN
Nivi and her brother Nikhil, have just moved into a dull grey building called Cosy Castle, on Dorabji Street in Mumbai. She adjusts quickly with her surroundings and befriends a girl named Sarita. Their favourite spot was the garden located in the apartment. The garden had two large Bimbli trees which they used to climb and read books on. Two old ladies, Mrs. Braganza and Mrs. Katodia hate to see children laughing and playing, and start to plot together to inflict misery on the innocent children. Nivi, Nikhil, Rehaan, Sarita, Venu and Vijay must save the bimbli trees, their favourite spot. I found this book to be interesting and simple. It was extremely funny. Each character and each scene was described clearly, giving the look and feel of the place. You could almost feel yourself see the whole thing happening. I loved the book and I have re-read it many times. The plot is interesting but simple. One gets many laughs out of this book.
(reviewed in July 2017) 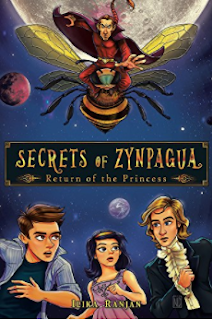 Secrets of Zynpagua: Return of the Princess, by Ilika Ranjan
Amazon US, Amazon IN
It is the first book in the series. The book talks about a land that was once on Earth, and was called Zynpagua. The ruler of Zynpagua was Queen Sussaina. There were good times in Zynpagua, until Sussaina neglected her kingdom when she was pregnant and allowed Drudan, an evil scientist, come to power. The three stars- Sun, Venus, and Mars, that made Zynpagua happy and rich, didn’t bestow their light and allowed Drudan to rule. Drudan created a light called the Violet Light, that would kill anyone if it entered the person’s veins. The violet light was so strong, that it pulled Zynpagua from the Earth’s surface and threw it into space. This scared the people and they accepted Drudan’s rule. Drudan locked Sussaina in the shadow of the Moon, so she couldn’t escape. At that time, she got pregnant with a baby girl who would save everyone from Drudan. This girl was sent to India to protect her from Drudan until she was old enough to return to Zynpagua. The rest of the book talks about how she returned to Zynpagua and drove Drudan out.
Everything is described in detail, and each part of the story is clear. The story involves many characters, and keeps switching from one scene to the other, but it is very smooth, and one doesn’t get confused.
(reviewed in August 2017) 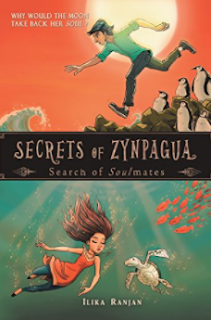 Secrets of Zynpagua: Search of Soul Mates by Ilika Ranjan
Amazon US, Amazon IN
This is the second book in the series. It talks about how Drudan defeated and crushed without the violet light starts planning and conspiring with a mermaid on how to defeat Anika. To his delight he finds out that King Soto, Anika's father is being held in the mermaid's clutches. With the help of Romeo, a sea snake and the mermaid he comes up with a clever plan. Meanwhile, back at Zynpagua Queen Sussania, Anika and Vivian, Anika's brother are thinking of a plan to turn back Femina, Vivian's girlfriend into a human. Before, Drudan had been defeated he had turned Femina into a stone statue. Anika had had a premonition that a girl named Aarna Malhotra would save Femina. Now Fredrick, Anika's uncle was going to India to find Aarna Malhotra. The rest of the book talks about how Femina is saved and how does Anika defeats Drudan yet again. This book was as amazing as the first. Everything is described in such detail and so clearly. You feel like you're sitting there in Zynpagua itself. I recommend anyone who loves fantasy to read this amazing book!
(reviewed in Nov 2017)