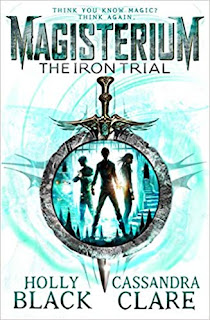 Call tries to fail the test in every way imaginable, for fear of being taken away to the Magisterium. He even succeeds in doing so and comes dead last with a negative score, but for some unfathomable reason, one of the most prestigious Masters at the Magisterium chooses him to be in an apprentice group along with two others.
At the Magisterium, Call slowly learns magic and also about the history of mages, especially the Enemy Of Death, who had also been a mage but had gone evil and had tried bringing back the dead, but instead created grotesque creatures called Chaos-Ridden. He learnt about the elements, especially about Chaos, which came from the void and how only few mages called Makars, could control and use it. The Enemy of Death was also a Makar. Since, there were very few Makars, the Magisterium was hoping that one of the students would be a Makar so that he/she could fight against the Enemy Of Death if needed.

Call slowly starts being drawn into the world of magic and even succeeds in becoming friends with his fellow apprentices, Aaron and Tamara. The year reveals many surprises, but the most interesting and shocking was the discovery that Aaron was a Makar. When a student is kidnapped, Call discovers a traitor and a truth about himself. A dark secret that he himself, hadn’t known about. Now with the burden on his chest, Call hides the secret from everyone as he graduates from his first year at the Magisterium, the Iron Year.

This series is written by Cassandra Clare and Holly Black. It has a very unique plot with many twists and turns, most of them are unexpected. One of the best plot twists was that Aaron was a Makar. I really liked this twist as normally the protagonist is the one with the powers and is a hero. This series was very different in this aspect. There is a certain darkness about the plot and the characters, especially Call, Aaron, and Call’s father, Alastair Hunt. The prologue is really intriguing and chilling and it sets the mood for the whole book. Despite all of its darkness the book also has its share of humour. One of the moments is when Tamara threatens to kill and then sort Call’s guts into piles. There is a very nice feel of mystery when you read the book and it encourages you te read more. The first book was very well written and it encouraged me to read the whole series. Overall it was a nice book to read and the plot was gripping and entertaining all at once. I would recommend kids above the age of 11 to read this series.