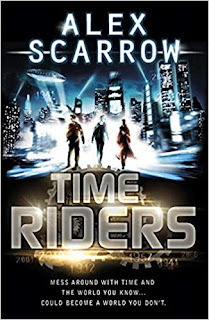 To cut a long story short, they wake up and find the old man who saved them. The man introduces himself as Foster and tells them he works for an agency called TimeRiders, the same agency that the three of them were recruited for. They would work with the agency and their goal would be to prevent time travellers from altering the past. When they went for a walk Maddy notices that they are in New York. However, the Twin Towers were still part of the skyline. Foster explained that they were in 2001 on 10th September, the day before the 9/11 attack. The three of them would be the New York group of the agency. The room where they woke up would be their field office where they would be living and working. The field office was in a time bubble of 48 hours and would reset on the night of 11th September. Therefore, the three of them would be reliving the 10th and 11th of September over and over.Each one of them had a particular role. Sal would be the observer as she was very observant and would immediately notice if anything had changed or if time travellers had changed anything. Maddy would be the analyst and would discover where and when the change occurred. Liam would be the field agent and would be sent back in time to fix and correct the timeline.

Well, there’s that. Now that I’ve explained the messy details you probably will understand the rest.

Soon after this, Sal notices a change, a huge change. New York looks the same at first glance but in reality it is completely different.Maddy discovers that the change occurred somewhere in the Second World War when Hitler invades Russia except now he doesn’t. Liam along with Bob, a support unit goes back in time to find out what exactly happened. Liam and Bob miss the return windows and are stuck in the past. They discover a man named Kramer is responsible for the change. While things weren’t bad at first everything changes when Kramer goes mad. Now Liam and Bob have to stop Kramer from destroying the world and mankind and find a way back to their time before it’s too late. While Liam and Bob are racking their brains in the past, their actions have repercussions in the future. Foster, Maddy and Sal see changes take place until New York is no longer recognisable with cannibal mutants haunting the streets. With Maddy, Sal and Foster being hunted, Liam and Bob have to find a way to fix this before it’s too late.

I have recently started reading sci-fi and this was one of the first books that I read in this genre. I am so glad I started with Time Riders because it has been an amazing experience so far. Sure, it uses the same cliché of time travel and people going back in time but unlike most plots, here the protagonists are forced into it with the other option being death. Also the transition of one time period to another is quite smooth and this series also silently protests against pollution. This is evident when the book jumps to the future and shows how bad things are in the future and how there are no resources. Another aspect that I noticed or felt was that the agency was quite cruel in separating the recruits from their family and giving them an ultimatum. Either they have to take the hand of a stranger with no idea what will happen or death. It’s quite sad. While it’s slightly confusing, you can keep a track of events by looking at the end of a book that shows the timeline and the changes. This series was quite enjoyable to read and I didn’t mind the slightly creepy parts about the violence though. The series is dark, mysterious and things don’t always turn out well. I liked it because of this as it reminds me of life. I really loved the first book.