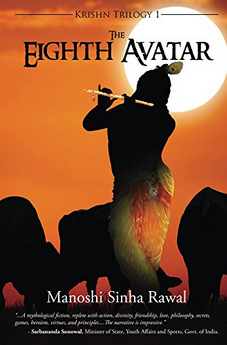 by Manoshi Sinha Rawal
This book is about one of the avatars of Lord Vishnu.

This book is about the eighth avatar that is Krishna. It is not about the whole life of Krishna but it is till Krishna’s battle with Jarasandha. But even in this much the book attracts the attention of all. One reason is because it has simple language that everyone can understand. The other is that it explains everything as simply as possible. I can guarantee that if you have not read about the life of Krishna then, after reading this book you will surely understand what it is about. It makes you feel that you want to turn page after page. Since I have read many versions of Krishna’s life I turn the pages just to know how this version goes.

I was happy that this book did not concentrate much on the love life between Krishna and Radha because as a kid I am not interested in all this love stuff. I was really surprised because in almost all the versions that I have read they have quite a lot to say about the Krishna-Radha story.

It kept on attracting me like a magnet. Sometimes I would simply stop reading it. But again, the next day the first thing I would do was to find out what happened next, even though I knew it. It had that kind of power. It also kept on switching between the scenes.