Abigail: The Breeze Fairy (Rainbow Magic: The Weather Fairies, No. 2)

Hello everyone! This is another super exiting adventure. If you want to know follow me. Today Rachel and Kirsty were sitting in the sunshine enjoying helping the fairies again. This is the second time we are helping the fairies said Rachel. Yesterday they had met Crystal the snow fairy. And now they had to help the others to. Today was the summer season ans so was it the summer festival. Kirsty's grandmother had gone to the cake competition. Just  then Kirsty's mother asked them to go to the cake competition to cheer up Kirsty's grandmother. So they went. When they reached they saw that everything was flying here and there. When they saw Kirsty's gran they cheered up a bit because she was a happy plump lady. She said she might win this year. But now the wind blew so hard that Kirsty thought that the goblin was hiding under the table she checked under the table and saw a fairy. It was Abigail the breeze fairy! She was sitting on the decoretions.

She flew out and landed on Rachel's shoulder who was standing next to Kirsty. Soon they came out of the summer festival and looked up and saw a hot airballoon. Abigail said that the goblin was hiding inside the hot airballoon. So they flew up,and over there Rachel said she had a plan. She said Kirsty had to go and stand in the basket and Abigail should distract the goblin. While she would turn of the burnur. They agreed to the plan. Rachel turned of the burnur and the balloon began to sink and the goblin didn't even think and threw out the sandbag and even Kirsty had to come out .But still it was sinking so the goblin even threw out the feather. Abigail caught it and ordered the wind to stop. It stopped they went down and met Kirsty's  grandmother she said she had won so they went home. 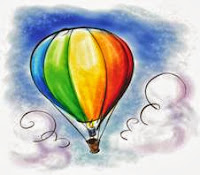