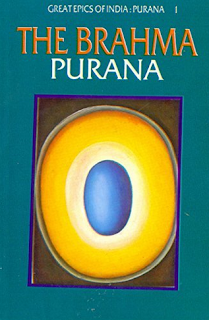 This Purana has been recited by Romaharshana, a disciple of Vedavyasa to some sages who were performing a yagna.

I would like to tell a story in the Brahma Purana that I found very nice.

Once there lived a cruel hunter. He used to kill birds, animals, sages and brahmanas. One day he caught a female dove. It was raining and it was very cold that day. He took shelter under a tree. That same tree was the home of the female dove’s mate. He was mourning for the female dove as she had not come back. The latter heard him from inside the cage and told the male dove that she was trapped. The male dove wanted to free her but the female dove said that the hunter had taken refuge at their home so it was their duty to serve him. Since the hunter was suffering from cold the female dove asked the male dove to light a fire. Soon the fire was lit. The male dove immolated himself in the fire so that the hunter would have food to eat. The grief stricken female dove asked the hunter to be freed. The hunter did so and the female dove to hurled herself into the fire. The hunter had heard everything and was amazed. The female and male doves were taken to heaven for their selfless acts. The hunter repented for his misdeeds. He was told by the doves to bathe in Goutami Ganga for 15 days and all his deeds would be forgiven. So great was the river Goutami Ganga. The place where the dove immolated themselves is known as kapotatirtha as kapota means dove.

The Brahma Purana talks a lot about the Goutami Ganga. There are many such stories in which the Purana praises this great river. The Goutami Ganga is supposed to be very sacred as it cleanses the sins of a person who bathes in it.

Now let me tell you about the four phases of life.
The first phase {brahmacharya} – This phase is the student hood of life. The individual spends his days studying under his/her teacher.

The third phase {vanaprastha} – This stage is the forest life phase. The individual retires to the forest. He detaches his mind from earthly things. He must eat fruits, berries and leaves. He must wear clothes of bark and skin. He is not allowed to cut and shave his hair.

The fourth phase {sannyasa} – This is the stage in which a brahmana completely detaches himself from things. He gets food from begging

The Brahma Purana talks a lot about the classes and phases of life so I decided to even include it in my review. This Purana is slightly different because it concentrates a lot on some things. Such as:

I found this different because most Puranas don’t concentrate a lot on a particular subject or topic. They just relate stories and the answers to questions on lots of topics.

I hope you liked and enjoyed reading my review. This is the third book I am reviewing that is written by Bibek Debroy. He has a very nice style of writing and I really enjoy reading his books.
I will soon come back again with another amazing review on another Purana.