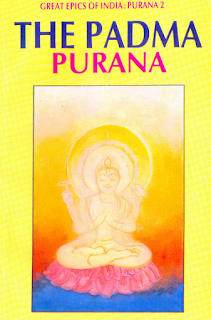 Last time I had written about the Shiva Purana. This time I have decided to write about the Padma Purana. The Padma Purana comes second in the list of Puranas after the Brahma Purana. All 18 Mahapuranas share 4 lakh shlokas between them but they are not equal in length. The Padma Purana is the second longest Purana. It is fifty-five thousand couplets long, second only to the Skanda Purana which is eighty-one lakh couplets long. The shlokas in this Purana are divided into 5 sections. They are:
The Puranas usually glorify all three main Hindu gods, Brahma, Vishnu and Shiva but sometimes they devote more attention towards one god. The Padma Purana is a satvik Purana, a Purana that glorifies Vishnu and describes his avatars in more detail.

Each Purana is believed to be composed in a different kalpa. A kalpa is one of Brahma’s days. At the end of the kalpa the universe is destroyed and at night evil prevails. The next kalpa again starts with the creation of the Universe. The Padma Purana was composed in a kalpa known as the Padma kalpa. It is also agreed that the final form of the Puranas were composed between 300 A.D and 1000 A.D but the earlier sections of the Puranas could have been composed around 500 B.C. Bibek Debroy decides to describe the Bhumi khanda in his version of this Purana.

The Puranas have been recited by Lomaharshana on a request by some sages. I am going to tell you a story which I found very interesting.

One day during the Dvapara yuga there lived a petty and mean thief called Dandaka. He stole from Brahmans, lied, ate beef and drank wine. Dandaka once decided to steal from the temple of Vishnu. His feet were muddy so he wiped it on the threshold before coming in. This action of his had a very unexpected result. Dandaka entered the main chamber of the temple. He thought that the statue was not of use to him but there were other gold and silver objects in the room that he proceded to take. Some objects fell down and awoke some people. Dandaka ran but he stepped on a sleeping snake and died of snake bite. Yama’s servants came to take him to hell for his various crimes but Vishnu’s messengers stopped them. Vishnu’s messengers explained that when Dandaka had wiped his feet, the threshold was dirty. Some dust was brushed away when Dandaka wiped his feet. Due to this all his sins were forgiven and he was taken straight to Vishnuloka. Such are the effects of cleaning Vishnu’s temples.

I really liked this story because it taught me a new fact and was very interesting.
Each of the Mahapuranas is connected with a part of Vishnu’s body. They are as follows:

I enjoyed this Purana of Bibek Debroy’s also. He has used the same pattern and used simple and understandable English. This Purana had many interconnecting stories so you had to remember all the stories to understand the Purana.

I hope all the Puranas are like this and it has been really nice experience reading this Purana too.