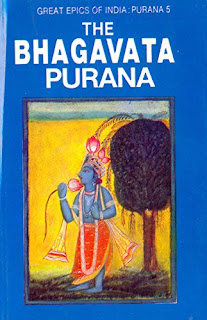 
This is the ninth Purana that I am reviewing. Wow! I never knew I had read so many Puranas. This is the Bhagavata Purana as you know. It is the fifth Purana in the list of Mahapuranas. It is a satvik purana, a purana that glorifies Vishnu. It is not too lengthy. It is medium sized and has eighteen thousand shlokas. It is then split up In twelve sections(skandhas) which are further split up into many chapters. The tenth skandha is the longest and talks about Krishna. Let us move on now.

This Purana has been narrated by Romaharshan alias Suta. He was called Suta because his father was a charioteer who are often called sutas. The sages in the Namisharanya forest wanted to know more about Krishna and the shastras so they asked Romaharshana to recite a Purana that had all these things. The Bhagavata Purana was the one that fit the description best so it was recited.


The first thing I would like to tell you is the incarnations of Vishnu. We mostly think there are only ten avatars, but the truth is there are 22-23 avatars. I will tell you about the ten known ones and the unknown ones. They are:

Unknown ones:
Who knew there were so many incarnations that we didn't know of. The stories in this Purana were mostly about the destruction of the Yadavas,etc. I couldn't think of a favourite story. I then came across the story of Parshurama. In this Purana I also found out why Parashurama was so kshatriya-like. I will narrate that story to you.

There once was a princess named Satyavati. She was very beautiful. One day a sage named Richika came to ask for Satyavati's hand in marriage. Satyavati's mother said that once the sage got a thousand horses that were white and had one black ear he would be able to marry the princess. Richika got these horses from Varuna and was married to Satyavati. His wife and mother-in-law both wanted a son. He got two bowls of rice pudding and gave one to each of them. Satyavati's pudding would ensure that the child would be a brahamana as Richika was a brahmana. His mother-in-law's pudding would ensure that her child would be a kshatriya as his father-in-law was a kshatriya. But Satyavati's mother thought that Satyavati's pudding was better so they exchanged the bowls. Richika later got to know and told his wife that it was wrong and now their son would be kshatriya like. Satyavati didn't want this and asked her husband if he could make their grandson like that. Richika agreed. Their son was Jamadagni who had many sons. One of them was Parashurama.

I always used to wonder why Parashurama was so warrior like even though he was the son of a sage. This story answered them all. It was a very interesting Purana that talked about a few new things that weren't mentioned in other Puranas and things that I didn't know, for example, the story above.

I would recommend people to read this Purana along with the Vishnu and Linga Puranas.

Another thing I forgot to mention which is also the best thing about the Purana. It is the most sacred of the Puranas so you obtain a lot of punya by reading it. The Purana also says that if you donate the Purana when it is placed on a golden throne in the month of a Bhadra you get unending punya.
I liked this Purana a lot. I feel it was the second-best Purana till now.


Links:
Other Purana reviews.
Kindle IN,  Kindle US