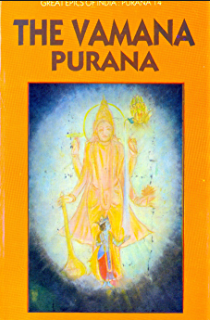 This is my eighteenth Purana review. This is my second – last rajsik Purana too. The Vamana Purana comes fourteenth in the list of Mahapuranas. It only has ten thousand shlokas. These shlokas are divided into a purva bhaga and an uttara bhaga. There are ninety-five chapters in the Purana. This Purana was first recited by Sage Pulastya to the rishi Narada.

This Purana talks more about the wars between the gods and the demons. It mentions the asura Andhaka a lot. It also focuses more on the formation of the goddess Durga except they call her Katyayani. The defeat of Mahishasura, Chanda, Munda and Raktajiva are described in great detail. The formation of Koushiki and Chamunda are talked about too.

In all these stories I found a very unique one. It talks about another vamana avatar of Vishnu. This story is given below.
There once lived an asura named Dhundhu. He received a boon from Brahma due to which no god could kill him. He drove the gods from heaven and killed many people. The gods rushed to Brahma’s abode and began to live there. Dhundhu decided to follow them but how could he reach Brahma’s abode. They came up with the idea to perform a hundred Ashvamedha yagnas so that they could earn a lot of punya and reach Brahma’s abode. The gods went to Vishnu for help. Vishnu promised to help them. A small river named Devika flowed beside Dhundhu’s yagna. The asuras spotted a small dwarf floating in the river. They rescued the dwarf who was actually Vishnu in disguise. On being questioned Vishnu made up a story.

On hearing this story Dhundhu wanted to donate something to the dwarf. The dwarf asked for three steps of land. Dhundhu agreed. The dwarf grew huge and covered the world in the first step and heaven in the second step. There was no place, so his third step was on Dhundhu’s back. The force of this was so much that a pit was created and Dhundu was pushed into it. Tri is three and vikrama means valour. As Vishnu had shown so much valour with three steps he was known as Trivikrama.

I had never ever heard about this story. It was so new to me. I didn’t know that Vishnu had taken another vamana avatar so that he could defeat Dhundhu. This story was never mentioned in any of the other puranas. This follows the same pattern as the original avatar, but this was against Dhundhu and not Vali.

I was surprised to hear that the Vamana Purana was a rajsik purana because the vamana avatar was one of Vishnu’s avatars not Brahma’s. This purana didn’t seem very rajsik because not much of the creation had been described and Brahma is mentioned only a few times. It is more about Vishnu and Shiva. At the end it praises Vishnu a lot and says that he is the most supreme of gods. But, even then this was an interesting Purana. I learnt a few new things like the story of Dhundhu for example. This is a sacred purana and if you read one shloka it is better than donating alms, performing yagnas or going to tirthas. This was one of the best Puranas which I have read till now.