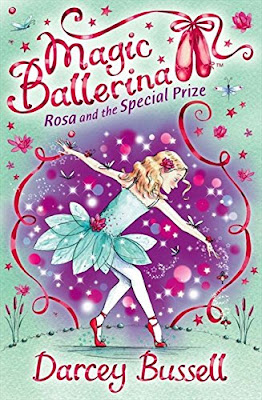 This is one of the books in the Magic Ballerina series. It talks about a girl named Rosa, who loves ballet and wants to become a famous ballerina like her mum. She also has a secret - she owns a pair of magic ballet shoes that take her to a magical world called Enchantia. All the characters from famous ballets live here. For example, the Nutcracker, the Sugarplum Fairy, etc.

This time when Rosa is taken to Enchantia a terrible problem has arisen. The sceptre of King Neptune (the king of the seas) is stolen. He believes that King Tristan, the king of the land had stolen it. King Neptune decided to flood the land and make huge storms till King Tristan returned it. Unfortunately, the problem was that King Tristan hadn't stolen it. It was up to Rosa and her friend Nutmeg, to find the sceptre in the vast sea and also the real culprit before the land and sea was torn apart by the storms. This was the first book in the Magic Ballerina series that I read. I found the book to have a simple and entertaining storyline. The best part was the dance which Rosa and Nutmeg did to become sea nymphs. I also liked the part when the real culprit is revealed. The only part that I didn't like was when the two girls were in the cave. It gets boring as all it talks about is Solly, a cave spirit. Other than that, it is a good read.
© 2018, Anika Agarwal. All rights reserved.
Posted by Anika at 1:53 PM