And Then There Were None, by Agatha Christie - Review 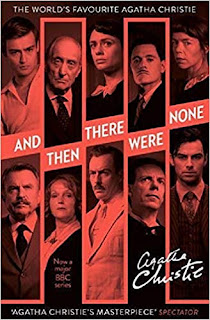 And Then There Were None, by Agatha Christie

From the title you can kind of guess what this book’s going to be about. I mean ‘And then there were none’ makes it sound like there were some at the start and then something happened to them and then it became none. When I say it like this, it doesn’t sound remarkable or memorable, but Agatha Christie takes this simple phrase and spins it into an unforgettable story.

Ten people are invited to the out of the way Soldier Island situated in Devon. All of them invited by a certain Mr. and Mrs. Owen. None of them have any idea that the others are coming. An odd collection they are. A judge, a governess, a doctor, two caretakers, a retired army general… well you get the idea. Upon reaching they are escorted to their rooms and are informed their mysterious host and hostess aren’t there. Unsure about what’s happening they decide to dine but what they don’t realize is that after that dinner nothing would be the same.

A voice starts speaking suddenly and each of them is accused of something terrible. Crimes from the past, that each of them had tried their best to hide, had now been exposed. Uneasily they brush it off but then one of them dies suddenly. Shocked to the core they decide to leave but soon another one of them dies and then another and another… and each person dies exactly as is mentioned in the morbid nursery rhyme that hangs in their rooms.

It doesn’t take them long to realize that a murderer is on the loose. A murderer who won’t stop until each and every one of them is dead.

Agatha Christie isn’t called the Queen of Crime for nothing. From the blurb you get to know that someone is killing them off but despite knowing this you still get the shivers. And despite knowing they’re going to die, you still keep hoping with all your heart that they’re going to find the murderer. Each time a person dies, you think maybe this time they’ll find the killer or maybe this person is the killer. The book is grabs a hold of you from the start and doesn’t let go. You find it impossible to put it down. Agatha Christie was ingenious in the way she killed them off, as she followed the nursery rhyme to the letter. In each death she added her own twist that made it seem like they were going to die differently, but afterwards you can see the clear references to the rhyme.

While reading I had the shivery feeling and I could not stop reading. I had to complete the book and at the end I was amazed. I could literally imagine everything happening - such was the power of the book.

You read with your heart in your mouth, pulse racing and above all a ray of hope that perhaps, just perhaps there might be someone left alive at the end.

All said and done, at the end you realize that the whole book comes down to five words

And
Then
There
Were
None…