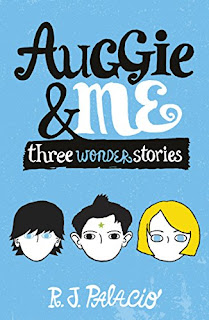 This is another book in the Wonder series. The first book called Wonder, is about a young boy named Auggie, whose face is, well, not exactly normal. Having being home schooled all his life, Auggie is in for a rude shock when he finds out that he has to start attending normal school. The rest of the book talks about Auggie’s journey through school and the troubles he faces and the things he discovers. Throughout the book there are parts told from other characters points of view and how they feel about Auggie.

So that was the first book, all about Auggie. This book, Auggie and Me, is completely the opposite. It doesn’t even talk about Auggie. Instead it talks about three characters and their lives. You might wonder then why this book is called ‘Auggie and Me’, well you’ll soon see why.

‘Auggie and Me’ delves into the lives of three children, Julian, Christopher and Charlotte. Ordinary children for the most part, except they are those few whose lives changed dramatically after the entrance of one boy.

Julian, Christopher and Charlotte have encountered Auggie at one point or another. Each in different ways one as an enemy, another as a friend and as a classmate. The one thing that makes each one of them unique is how they changed after that. In subtle or enormous ways, for better or for worse but they DID CHANGE.

That is probably the best way I can describe the plot of the book. You need to read the book to understand what I mean.

What’s fascinating is that Auggie isn’t even the focus of the book. Its like Julian, Christopher and Charlotte are the stars and Auggie is the background music. Always there and always setting the mood, sometimes so soft and subtle you almost forget about it but there.

The Wonder series has to be the most heart-warming series I’ve ever read. It is touching and the best part is that its so relevant to kids in school. It talks about all the things a kid faces in school, bullying, friends, isolation, etc. I loved the whole series and the second book is also amazing, though the first is the best.

You can only understand what I mean after reading the books.