I am writing about one of the best experiences I’ve ever had. Well, you can probably guess from the title, I’m talking about my experience with a Rubik’s Cube. Let’s start at the beginning…….

I’d had a Rubik’s cube at home for as long as I could remember. I used to fiddle and play with it even though it was not one of the smoothest cubes. After some time, I began to ask my father how to solve it. He knew only how to solve one face and tried to teach me. I soon figured it out and could solve one face on my own. I was now one step closer to my goal. After practicing how to solve one face, I wanted to be able to solve the whole cube. I looked online but didn’t understand anything. I slowly forgot about the cube until….

It was a new year and a few weeks had gone by. This was when I became interested in the Rubik’s cube again. It was a time when everyone in school was obsessed with Rubik’s Cubes. I saw many people in my school roaming around with cubes in my hands. At that time even my friends were interested, even obsessed with their cubes and I used to feel left out. I thought if they can solve cubes why can’t I.

It was a long process since I had to learn layer by layer. For those who don’t know, while solving a Rubik’s Cube we must first solve one layer, or one tier.

To get a clear picture, imagine that you are looking at a cube and are holding it in such a way that white is facing the top and yellow is facing the bottom (you can find out which face corresponds to what color by looking at the centerpieces. The red center corresponds to the red color, blue to the blue color, etc.). If a person solves a cube starting with white, you will know the first layer is solved when the entire white face is solved and each of the sides (except yellow) will have a strip of the same color (the green side has a strip of green, orange side has a strip of orange, etc..). A picture is given below. 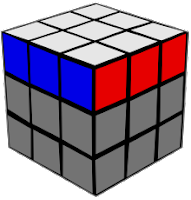 When the second layer is solved it looks as if two tiers have been solved and so on. There are millions of methods to solve a cube but the one I used needed only 3 algorithms and they were pretty easy. It does help if you know how to solve one face as it is then easier to get the cross at the start. It was quite frustrating when I first started to learn, and I could even see it on my friend’s face when she was teaching me. I didn’t know what to turn, how to get a piece in place despite being taught a million times, and how to remember the steps for each layer. However, it was worth it, since very few things could have given me the feeling of satisfaction and accomplishment I felt when I finally slid all 3 layers in place and saw the solved cube. It was one of the best and most irritating weeks of my life.

I personally felt that the second layer was the hardest when I was learning how to solve a cube, though I even used to get stuck on the third layer. After learning I just practiced and practiced till, I could solve it comfortably. Then came the best part. I was asked by my parents to teach my sister. It was amazing as finally, it was I who got to yell and scold her and not the other way around. The joy I felt because it was I, the younger one teaching the elder one. Ahhhh…….

Well, you have read about my experience so why don’t you try it out on your own and learn how to solve a cube, as I can guarantee that it will be amazing and you will never forget the feeling when you finally solve a cube on your own and slide the layers into pace.