Ready Player One, by Ernest Cline 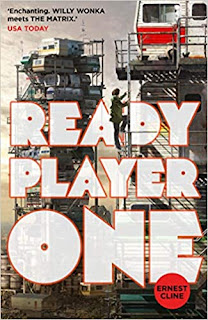 Ready Player One, by Ernest Cline

A month ago I was basically at a stage where I was reading books all the time and did that for about two weeks until I realised that I didn’t have any new books to read. I found this in my bookshelf while searching for something to read.

My sister had actually told me about it but I hadn’t paid much attention to it until then.

Ready Player One is a science-fiction book. It’s set mostly in a virtual world called the OASIS. In a world crumbling and a destroyed economy, the OASIS is the escape of millions. With a pair of gloves and a headset, even the poorest could use the OASIS. To get a better idea, imagine a world, perfect in every aspect and you have the OASIS. With millions of planets and thousands of quests to prove your worth, the OASIS can make even the poorest feel rich, albeit virtually. Well, perhaps that isn’t completely true. There is a chance, one chance to become the richest person alive. The Hunt.

James Halliday, the most gifted programmer to ever live and the creator of the OASIS, changed everything, in his life as well as his death. His death set in motion the most popular quest in history. A quest to find an Easter Egg hidden in the OASIS with five keys to find and five gates to cross. The person who won would inherit everything left behind by Halliday, including a stupendous amount of money and the OASIS.

The OASIS was Halliday’s legacy, the Hunt was a chance to claim it.

Years pass and no one is able to find the egg.

Then one day, everyone wakes up to find a name on top of the empty scoreboard used to track the Hunt. A name means that someone has found the key to the first gate. A name means that someone has taken the first step towards the egg. One step closer to unimaginable riches. That person is Wade Watts, an unassuming teenage boy that no would look twice at.

Ready Player One is his story.

Okay I know I made the whole story sound dramatic and told you almost nothing.
Well, if I tried to tell you more, it would probably end up in me telling you everything.
After one point it is almost impossible to tell more without revealing everything else.

Now coming to the book itself, I know this is going to sound very weird but the best way to describe it is satisfying. I know satisfying is a pretty weird way to describe a book but that’s exactly how I felt. Maybe it was the fact that I had a new book to read or the book itself was pretty amazing but while I was reading, I had this warm feeling kind of like when you’re full after eating and are in that almost but not quite sleepy state.

The book is also full of history and a lot of information about the OASIS and the Hunt but the author has written it so well that you don’t dine it boring. It’s pretty amazing when you consider the amount of research the author has done as well as how much he made up when it comes to the OASIS. . It didn’t have the ‘on the edge of your seat’ thrill but it had a different feel that made you want to know more. It doesn’t become boring at all and that’s quite a feat to manage with a book like this because there is a lot of information that was necessary to explain the OASIS and the Hunt as well as a lot of information about pop culture in the 80s and video games. Honestly , I will always love this book because it was the most satisfying book I’ve read.