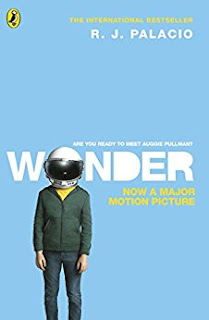 Wonde, by R J Palacio
Amazon IN,  Amazon US, Kindle IN, Audible IN

Wonder is about a ten-year-old boy named Auggie (August) Pullman. Auggie was an unlucky child as he had been born with a deformed face. Even after twenty seven surgeries Auggie’s face looked so bad that people were shocked when they saw him. Auggie had never been to school before and had been homeschooled. Now, his parents wanted him to attend a real school as it would be fifth grade and the start of middle school for everyone. Auggie starts at Beecher Prep. Everyone find him scary-looking and most of them are mean to him The book then talks about how Auggie feels everyday at school and how he makes a few friends and how he starts enjoying school.

The book was one of my favourite books ever because everything was written so well and it was simply amazing. My favourite part was that the book had many different parts. Most of them were from Auggie’s point of view but a few were from the different people in his life like his sister or his best friend. This gave you a chance to see what everyone feels about Auggie and from their point of view. It was a great book to read and I loved the sequel of this book too.